Zoysia and fescue grasses are at two opposite ends of the lawn grass spectrum. One is meant for use in hot, coastal weather. The other is a cool-season pasture grass repurposed into a common lawn grass. These are not at all interchangeable species of grass and as such, careful consideration should be taken when comparing zoysia vs fescue. 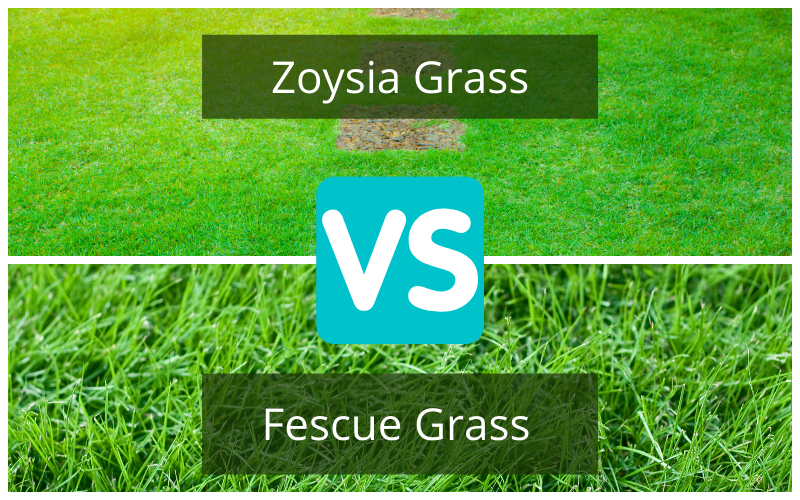 Zoysiagrass or just “zoysia” is a warm-season grass that cannot tolerate the cold. If likes moisture, sunlight, and heat. Fescue is adaptable but, unlike zoysia, prefers the cold to hot weather. It does very well in shady areas and will survive a freezing winter and then green up quickly in the spring.

This article will focus on the fescue varieties most comparable to zoysia in appearance. These are fine fescue and chewing fescue. Below is an in-depth comparison of all of the major differences you need to know before choosing between zoysia and fescue.

Zoysia and fine or chewing fescue both have a very similar appearance. They both have a deep green color when healthy, should be mowed short, and have a soft, fine texture. The difference is that zoysia will grow more closely together and create more of a mat than fine fescue. This is why, once it is established, zoysia can take more damage and is more resilient to digging than fescue.

Zoysia is best used in a sunny and hot lawn with hard borders. It cannot be allowed to freeze. Zoysia is difficult to dig through and remove. Be sure you want a zoysia lawn before you plant it as replacing it is both costly and, sometimes, close to impossible without the use of strong chemicals.

Fescue is best for a cool, shady lawn. Few lawn grass species can hold up to the shade like fine fescue or chewing fescue. Once established, and fescue establishes quickly, fescue lawns can hold up to moderate traffic and have no pests and diseases that target fescue specifically. Fine fescue is often used in shady parks.

Zoysia prefers moist, well-drained, hot soil. It can tolerate dry, sandy soil but only in areas with high humidity and coastal regions. Fescue can thrive in nearly any type of soil except heavy clay. It prefers slightly sandy soil or rich loam.

Zoysia and fescue of all kinds only need 1” of water per week to do well. However, fescue can survive longer with a better appearance than zoysia during a drought. Fescue also prefers a drier climate while zoysia does better with high, constant humidity.

Zoysia requires full sun and high heat to thrive. If temperatures drop down below 55F consistently, zoysiagrass will go dormant to avoid taking damage. If allowed to freeze, zoysia will likely die. Zoysia will not go dormant in high heat and can grow more quickly than most common grass species above 90F.

Fescue can do okay in full sun but prefers a little shade to mostly shade with just an hour or two of full sun. Fescue is best for a yard with lots of shade trees or broad trees of any kind. Fescue can survive a freezing winter easily and will go dormant as temperatures approach freezing. As temperatures heat up in the spring, fine fescue will green up quickly and continue to grow until temperatures average over 90F, when it will again go dormant until things cool back down.

Zoysia is a low durability lawn grass species until it has been well established. After this point, zoysia can take a lot of damage without showing it. This makes it a high-traffic grass with good durability and a quick recovery rate.

Fescue establishes and fills in quickly if damaged. It doesn’t have the highest recovery rate or overall durability and would do best in an area with low to average traffic and few threats from digging animals. This is another reason why planting it under and around large trees is very effective.

This is the one area where, in the comparison of zoysia vs fescue, the two come in almost at a tie. Both zoysiagrass and fescue are equally susceptible to grubs, Webworms, thrips, and beetles. They are both susceptible to mold, mildew, and fungal infestations, too. Just like almost every other variety of lawn grass.

Zoysia, however, is prone to heavy thatch buildup. This makes it more likely to be infected with mold and mildew if the climate has high humidity. On the other hand, fescue is less resilient to digging.

Zoysia grows more quickly than fescue and at the peak of its growth cycle each year may require mowing more than once a week, on average. Fescue may require no mowing if temperatures reach over 90F in the summer and it enters a period of dormancy. Both zoysiagrass and fescue should be mown to a height of 1”.

Zoysia, as it is commonly referred to, is ‘Zoysia japonica’. Two other species of zoysia are also cultivated for use in more tropical, coastal regions where temperatures can reach and stay at extremes for long periods. These are ‘Zoysia matrella’ and ‘Zoysia tenufolia’. Due to their rapid growth rates and high water requirements, these often do not make the best lawn grass varieties.

Fescue comes in many varieties. Fine fescue and chewing fescue are the types that this article has focused on. There is also hard fescue which has a rougher texture but which is more resilient to damage. Or creeping fescue that is low-growing.

Fescue will always be less expensive to plant and maintain than zoysia. It needs less mowing, less feeding, and can be planted from seed. Zoysia, on the other hand, needs to be planted from plugs, starts, or sod cuttings.

Can You Mix Zoysia and Fescue?

No, you should never mix zoysia and fescue. They require different environments to thrive and cannot successfully coexist. Zoysia, in a warm environment, will choke out all of the fescue in a lawn once the zoysiagrass has gained a foothold. Fescue, on the other side, can survive a freezing winter where zoysia would die back completely.

Fescue lawns, particularly fine fescues, are adaptable in most regions. They can make do with almost any soil type or moisture level. They can even tolerate a soil pH as low as 5 and live in almost complete shade without thinning. However, this is not the best grass type for an athletic field. As long as you have only moderate traffic and temperatures stay cool in your region, fescue could be a solid choice.

Below I’ve prepped a table that very quickly shows you the main differences when comparing Zoysia grass vs Fescue grass.