Running out of gas is something that happens to me nearly every time I use my lawn mower. It probably happens to you if you have a big enough yard or run it half-empty. I’ve never really been all that concerned when the gas runs low because by filling the tank back up and pulling on the starter cord, the lawn mower always starts up again.

Unfortunately, there are times when if you run the gas tank dry, your lawn mower won’t start up again. So, what could be causing this? Well, let me tell you. 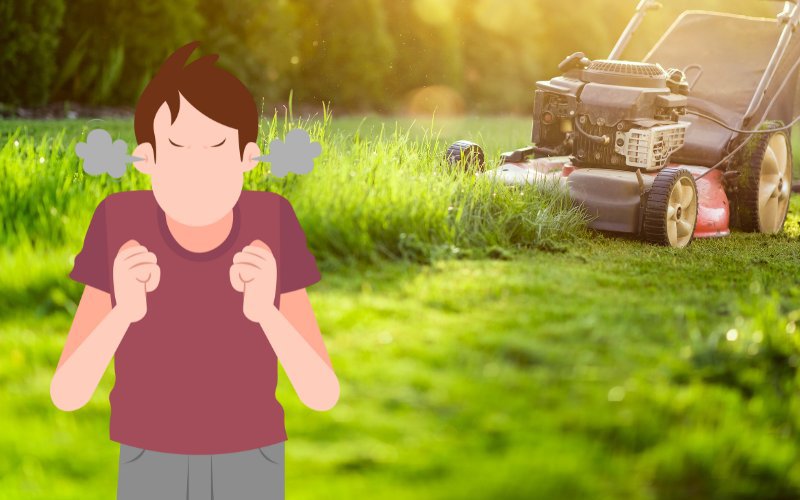 Why Won’t My Lawn Mower Start After Running Out of Gas? (The Short Answer)

If you ran the gas tank dry on your lawn mower, it either sucked air or pulled debris from the fuel tank into the fuel system and created a blockage. This means that even if you fill the tank back up again, the fuel needed to ignite in the cylinder can’t make its way through the various components of the fuel system.

There are several reasons why your lawn mower won’t start after running out of gas, but most of these are just a coincidence. Here I want to talk about the problems caused by running the lawn mower gas tank dry. So, let’s take a look.

Air in the Fuel System

I’d say that the number one reason you can’t get your mower started once it runs out of gas is because of an air lock in the fuel system. The problem is caused when the lawn mower continues to pull from the gas tank even when the tank is empty.

While the engine is running, it will pump all the fuel, then continue to pump and begin to pull air until the engine stalls. In the time it takes for the lawn mower to completely burn all the available fuel and stall, it will have pulled a lot of air into the system. This means that when you try to restart your lawn mower’s engine, the fuel is blocked by air.

One place to check is the fuel filter. If the fuel filter is full of air, this is a good indication that you have air in the system. Unfortunately, a lot of the time lawn mowers have fuel filters that you can not see into. This means you are going to have to look elsewhere.

So, if you disconnect the fuel line into the carburetor and give the starter cable a pull, fuel should come from the pipe. If you’re just getting air and a bit of fuel, then it means you have air in the fuel system.

It’s very difficult to avoid getting debris in your fuel tank, especially the impurities that come in the gasoline from the gas station. This means a lot of this junk ends up settling in the bottom of your gas tank.

Now, if you normally top off your tank and prevent it from running out, then you probably have a fair bit of junk in the bottom of your fuel tank just waiting to be sucked up once the tank runs out of gas. Fuel filters are there to stop this junk from getting into the carburetor, but they can only filter so much junk before they become blocked.

So, if you have a transparent fuel filter, you can take a look to see if it’s blocked or discolored. But if it’s made of a material that you can’t see through, you’ll have to remove the filter and take a look at what comes out of it.

I find an easy way to test the filter is to tap the inflow pipe onto a piece of paper towel and see what comes out. If it’s clogged and dirty, then you will probably see dark dirt land on the towel as you tap the pipe.

The carburetor jet works by a mixture of air and fuel being passed through the jet nozzle under pressure and converting gasoline from a liquid into a vapor. This is necessary as liquid gasoline will not ignite; only the gasoline vapors will ignite.

So, if junk from the fuel tank has managed to pass through a degraded fuel filter, then the carburetor jet is likely blocked. In my experience, even something the size of a grain of sand can cause a problem, as the jet nozzle is so tiny. So, to check for a blockage, you’ll need to remove the carburetor jet from the lawn mower and carry out an inspection.

To get to the carburetor jet, you’ll first need to remove the fuel cup, or fuel bowl as some people call it, then remove the jet. A socket wrench and a screwdriver should be all you’ll need to remove the jet from the lawn mower. Once you have the jet removed, just take a look to see if you can see through the tiny hole and look for anything visibly causing a blockage.

Fixing a Lawn Mower That Won’t Start After Running Dry

I’m almost certain that one of these potential causes is the reason your lawn mower won’t start after running out of gas. If your diagnosis is successful and you discover some type of blockage, you’ll want to carry out a repair.

Here‘s what you can do to get your lawn mower up and running again.

Removing the Air in the Fuel System

During your diagnosis, you removed the fuel line from the carburetor and gave the cord a pull. This is both the diagnosis and the repair at the same time. When the fuel line is connected to the carburetor, there is pressure inside the system that the fuel pump doesn’t have the power to overcome.

Once you disconnect the fuel line, the pressure is lost, and the pump can now push out the air. So, place the disconnected pipe into a container to catch the fuel, then give the cord several pulls. This process should be enough to get most of the air out of the fuel system and allow you to restart the engine. Just don’t forget to reconnect the fuel line to the carburetor.

Tools & Materials to Clear Air from the Fuel System

To swap out a fuel filter, you’ll first need to use a pair of pliers to remove the spring clips from the two fuel lines. Give the clips a pinch, then slide them a couple of inches down the fuel lines so that they no longer rest on the fuel filter’s inlet and outlet.

Now, take your replacement filter and check the flow direction. You need to install the filter in the proper position so that the fuel flows in the correct direction. The filter is marked with an arrow showing you the way the fuel is designed to flow.

When installing, make sure the arrow is pointing toward the carburetor. Then, reattach the two fuel lines and pull them onto the fuel filter as far as they will go. If you don’t pull the fuel lines on enough you may end up with a leak. So, attach the lines, then reposition the two spring clips.

If you discovered that your mower won’t start after running out of gas because of a blocked jet, then the diagnosis is half the work. By removing the jet, you are half done with the fix.

To finish, find a wire that is small enough to pass through the jet and push out any blockage. Because the size of the jet’s opening is very precise, just be sure you don’t use anything that could make the opening any bigger.