I always notice a slight scent of gasoline whenever I enter my tool shed, but never anything too bad. Usually, it’s just down to the fact that I have gas cans and several gas-powered tools for the yard stored in the shed.

But if I smell gas too strongly, then I know something is probably leaking. One of the first things I do is check to see if the lawn mower is leaking gas from the carburetor. Nine times out of ten, the cause of the smell is indeed the lawn mower carburetor leaking gas.

So, let’s go over what you can do if your lawn mower is leaking from the carb. 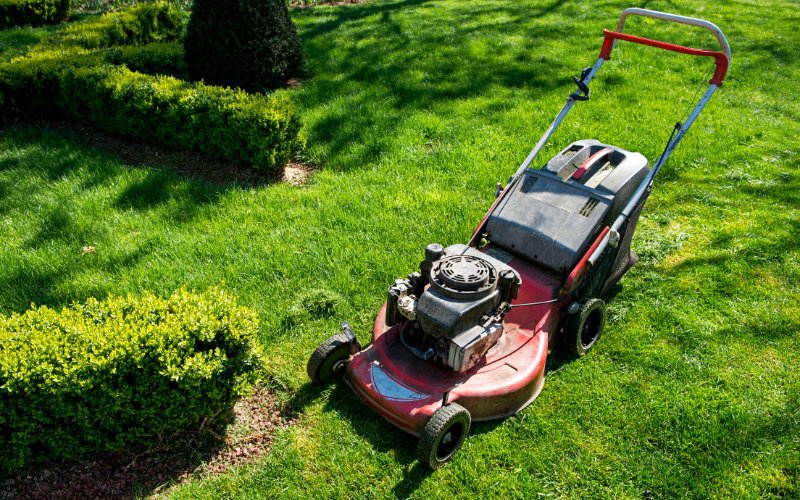 Why Is My Lawn Mower Carburetor Leaking Gas? (The Short Answer)

Lawn Mower Carburetor Leaking Gas? (A Closer Look At The Reasons Why)

If you have a lawn mower spitting gas out of the carb, then you want to diagnose the exact location of the leak. Here are my top causes that can make a carburetor leak.

A carburetor fuel bowl is basically a reservoir that holds fuel on the bottom of the carburetor. The fuel bowl needs to be removed to gain access to the fuel float and the jet. To remove the cup, a seal must stop fuel from leaking between the carburetor and the cup.

The use of O-rings on the cup and the mounting bolt creates this seal. If your lawn mower carburetor is leaking gas in this area, it’s likely due to a bad seal caused by a damaged O-ring or an incorrectly installed cup.

So, check that the bowl is secured correctly and that it isn’t loose. Then, use a socket wrench to remove the bowl from the carburetor and inspect both of the O-rings. If the bowl is loose or there is a damaged O-ring, then you’ll have diagnosed the source of the leaking gasoline.

A gasket forms a seal between the carburetor and the engine. This seal ensures there aren’t any gaps for fuel to leak through or for additional air to enter the engine. If your carburetor is loose, then it could have damaged the gasket.

See if you can tighten the carburetor mounting bolts, then check if the lawn mower still leaks gas. If the leaking continues, then you’ll need to remove the carburetor and change the gasket.

One of the big reasons that lawn mowers leak gas is a stuck float in the open position. Once the gas level goes down in the carburetor fuel bowl, the float lowers and allows the bowl to fill. Once the bowl is full, the float floats up and cuts off the flow.

Unfortunately, the float can stick in the down position because of issues like dirt and fuel gum. When stuck, it allows fuel to flow continually with the force of the fuel pump.

So, grab your socket wrench and remove the fuel bowl from the bottom of the carburetor. Then, lift the float and check if it returns to the down position.

If it takes some effort or it gets stuck in either the up or down position, then you’ll have found the problem. This means you need to remove the float and carry out a fix.

If your lawn mower has a primer bulb attached to the carburetor, the bulb could be damaged and cause a leak. So, give the primer a press and check to see if it leaks. If it does, then you’ll need to replace it.

Some bigger lawn mowers, like zero-turns and tractor lawn mowers, have fuel shut-off solenoids. These solenoids attach to the carburetor fuel cup and hold the float in the up position to stop fuel from being able to flow.

Over time, fuel lines can become brittle and split due to the corrosive nature of the fuel passing through them. Also, the repeated heating and cooling of the lines as the mower heats up and then cools adds stress to the line.

So, a good place to check if you have a lawn mower carburetor leaking gas is the connection between the carburetor and the fuel line.

Take a close look to see if your lines are damaged in any way and see if this is where the fuel is coming from. If you give the fuel line a bit of a pull it may open a split that you might not normally see. If you do find a leak, then you’ll need to replace the fuel line.

How to Fix a Lawn Mower Carburetor That Is Leaking Gas

Now that you have worked out the location of the gas coming out of the carburetor, it’s time to check out the repairs. Here is how I go about repairing a leak on my lawn mower’s carburetor.

First, use a socket wrench to remove the fuel bowl from the lawn mower’s carburetor. Then, remove the bolt from the fuel bowl. Next, you need to remove both of the old O-rings. I usually use an opened-up paperclip to hook these off.

Then, cover your new O-rings in a light coat of oil. This helps them go on easier and last a bit longer. Slide on the O-rings, making sure that they seat correctly and are not twisted. The last thing you want to do is damage a new part by installing them crooked.

Lawn mower carburetors come in all different designs and are attached using a variety of methods. So, my example to replace your lawn mower’s carburetor gasket follows a Briggs & Stratton engine, a common engine found on many different lawn mowers and lawn mower designs.

Even if you don’t have a Briggs & Straton, this process gives you a good understanding of what is required. Let’s take a look.

Steps to Replace a Carburetor Gasket

Again, replacing the carburetor float will all depend on the specific carburetor you have. These steps outline a Briggs & Stratton engine on a push mower. If you have a different lawn mower, especially a bigger lawn mower, you might find that some of the steps are not necessary.

Let’s have a look at the process.

Steps to Replace a Carburetor Float

For this fix, we’ll be once again taking a look again at a Briggs & Stratton engine on a push mower, like a Snapper. This type of bulb is held in place with a push fitting using two plastic tabs. Now, it’s not particularly difficult to swap out, but it is definitely fiddly.

Once you manage to free the tabs, you should be able to pull on the bulb and release it from the carburetor. Next, remove the bulb from the bulb mount and install a new rubber bulb. Then, insert the bulb, mount it to the opening where you previously removed it, and give it a good press. You need to make sure that both tabs click back into place. Fiddly, but easy enough to do.

If you find a gas leak on your carburetor fuel cut-off solenoid, you’ll first need to disconnect the solenoid power connector. Then, unscrew the solenoid from the fuel bowl. Next, remove the old O-ring and install the new one.

Finally, screw the solenoid back into the fuel bowl and connect the power. Compared to other causes of gas leaks on your lawn mower, this is a super quick fix and can definitely stop a gas leak.

The most important thing about replacing fuel lines is to make sure that you use the right replacement pipe. A quick trip to the lawn mower store will remove any doubt about getting the right product. So, here is the step you should follow.