With more of the United States in a drought every year, people are recycling water from pools or using gray water to irrigate. Both of these sources have chlorine, the active ingredient in bleach, in them. Since bleach is used to kill microorganisms, it is natural to wonder if the bleach in the water kills grass. It doesn’t do any good to water with recycled water if it does. So, does bleach kill grass? 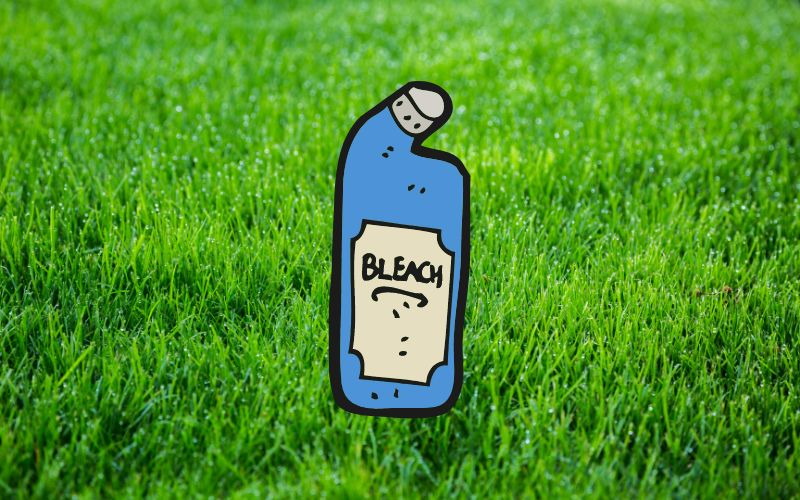 Yes, bleach does kill grass, but only in very high concentrations. Concentrations of chlorine must be above 150 parts per million (ppm) to harm grass. When water with a chlorine content of 500 ppm was used to water a football field of turfgrass, the grass died. That was an industrial mishap, however. Will diluted bleach kill your grass? No, it isn’t strong enough.

If you look on a bleach bottle, you will see sodium hypochlorite listed as the active ingredient. This is a liquid form of chlorine. The bottle will also tell you that it yields something like 7.86% available chlorine. Chlorine is the product that kills the grass, but bleach isn’t a very strong source of chlorine.

What Does Bleach Do To Grass?

Chlorine attacks many parts of the grass. Sodium hypochlorite is a salt, so it can kill plants like any other salt. The chlorine part of the compound is absorbed in the roots and the roots send it to the leaves. Chlorine can also be absorbed directly into the leaves when they are watered.

Turfgrass is not particularly sensitive to chlorine if it is being mowed regularly. The chlorine accumulates in the part of the grass blade that is cut when the grass is mowed. In other, more sensitive plants, the chlorine causes a burn, similar to overfertilization. Enough of the chlorine will cause the plant to completely burn up and die.

Why Doesn’t Bleach Kill Your Grass?

The chlorine in the bleach binds to soil particles, so isn’t available to be taken up by the roots. If you poured a bottle of bleach over one spot, enough chlorine would probably be absorbed by the leaves to make it sick or even kill it.  Excessive chlorine levels in water, such as recycled water, may be a problem on occasion. However, free chlorine is unstable in water. If the water is stored for even a few days, the excess chlorine will dissipate.

What to Use Instead Of Bleach to Kill Your Grass

If you had hoped to use bleach to kill your grass, don’t despair. There are far more effective herbicides to use that will get rid of the grass. Products containing 2,4,D will kill broadleaf grasses such as St. Augustine. Be careful not to get it on your flowering plants as it will kill them, too. For grasses like Bermuda grass, use a product containing glyphosate. This is the active ingredient in RoundUp®. Glyphosate is a broad spectrum weed and grass killer. It will kill whatever you put it on. Glyphosate and 2,4,D only work when the soil temperature is above 60 F, and the plant is growing. Remember that many grasses are dormant during the heat of the summer, so plan to use the grass killer in the spring for warm-season grasses and in the fall for cool-season grasses.

Does Bleach Kill The Soil Microbes?

Turfgrass (and most plants) depend on soil microbes to make the nutrients in the soil available to them. Without soil microbes, plants just don’t grow as well. Bleach will kill the microbes in the top ½ inch of soil. However, microbes reproduce quickly, and the population will bounce back almost immediately. In one study, researchers continuously watered a patch of soil for 126 days. Two days after the water was stopped the microbes were back to normal.

It depends on how recently chlorine was added to the pool water. Right after adding chlorine, yes it will kill your grass. After it has sat around for a few days, the excess chlorine dissipates, and the water is usually safe to use on turfgrass.

How Do I Treat Bleach Spills On Grass?

If you spill bleach on your turfgrass, you will need to flush the area with water to leach it out of the soil. While turfgrass will absorb some of the bleach right into the blades, it is pretty tough and will probably be okay.

In conclusion, household bleach is not a very effective herbicide. You can‘t buy bleach over-the-counter that is strong enough to do much damage to turfgrass. There are other products you can use to kill grass, however.