When it comes to the differences between 2 stroke and 4 stroke lawn mower engines, the use of oil is one of the most important. As most people know, a 2 stroke engine requires oil to be mixed in with the gas that it burns. On the other hand, 4 stroke engines have a separate reservoir that stores oil and circulates it through the engine. Using gas without any oil mixed into it in a 2 stroke mower will cause serious problems, and so would running a four-stroke engine without any oil in the crankcase. But how about using motor oil labeled as 2 stroke oil in a 4 stroke engine? Maybe you used to have a 2 stroke mower, and recently bought a 4 stroke mower, or maybe you just bought the wrong oil by accident. Whatever your case is, let’s take a look at this scenario. 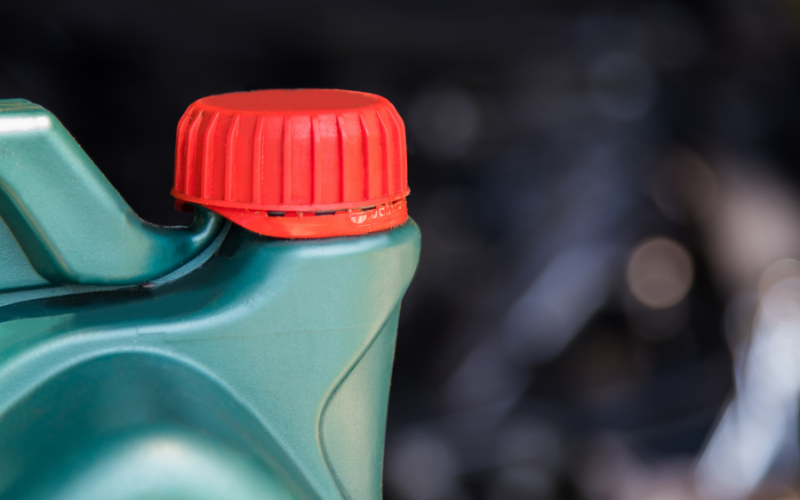 What Will Happen When Using 2 Stroke Oil in a 4 Stroke Mower Engine?

If you decide to use 2 stroke oil in a 4 stroke engine, there will be a few side effects. What I mean by this is that oil meant for 2 stroke engines will perform a little bit differently than the normal 4 stroke engine oil would.

But, when it comes to putting single grade, 2 stroke oil into a four-stroke engine, you will just encounter a lower viscosity when hot. This means 2 stroke oil will be thinner after the engine is warmed up. This isn’t a huge deal but it can put extra stress on your mower, and that’s why you don’t really want to be using this oil in a 4 stroke engine regularly.

One way that 2 stroke oil will put a bit of extra stress on your lawn mower is by causing the running temperature of the engine to increase slightly. Since it will normally have a lower viscosity when hot, your engine parts will be moving a bit faster than usual.

On older and worn 4 stroke engines, the use of 2 stroke oil could result in a bunch of oil droplets flying out with the exhaust fumes. This is also due to the single grade, thinner characteristic of 2 stroke oil. Since 2 stroke oil is meant to be burned off in the engine with the fuel, it doesn’t perform as well when recycled over and over again.

Since two-stroke oil is meant to be burned off, it has very high lubricating properties. Because of this, your engine should actually be supplied with the same amount of lubrication, even if it runs a tiny bit more roughly. The same is true for engine compression. Using 2 stroke oil in your 4 stroke engine shouldn’t hurt the compression.

I Accidentally Put 2 Stroke Oil in My 4 Stroke Engine – What Do I Do?

If you put some 2 stroke oil into the oil reservoir of your 4 stroke engine, the engine and tool will probably be fine. As far as what you can do, there are two main things: run the oil until it’s time for an oil change, or empty the oil and put normal 4 stroke engine oil in.

However, if you live in a climate with very hot or cold temperatures, using multi-grade 4 stroke oil is the way to go. In this case, drain the engine oil and refill the reservoir with the correct amount of 4 stroke oil.